The Legacy of Ruth Bader Ginsburg

As a minority vote on an increasingly pro-death-penalty court, Ruth Bader Ginsburg spoke up for truth in the only available way open to her: “I dissent.”

For us that means that our argument, at the present time, may seem to be only a whisper and it will be far from winning the day, but wait…wait and listen, and stay close to struggling people; get your seeds of truth out into the public domain any way you can. Life moves, moral consciousness in citizens awakens, and, in time, the righteous idea – that planted seed – springs up and societal change happens.

“Fight like Ruth” is a mantra I have made my own. The “evolving standards of decency that mark the progress of maturing societies” (Chief Justice Earl Warren’s words about the Eighth Amendment), do not come about by changes in legal documents. Those documents, and the courts that issue them, follow transformation that has already taken place in the consciousness of the people through relentless dialogue.

The first was in 1993, when Dead Man Walking was first published, she invited me to her chambers to meet her young clerks, I believe, to share my passion to end the death penalty. She explained that she was not adopting the approach of principled opposition to every death case as Thurgood Marshal and William Brennan had done, but was taking each on its face and arguing more narrow issues, where she might find common ground with those on the court who disagreed with her, but if not, to register her dissent loud and clear.

My second meeting with her happened in 2004 when The Death of Innocents was published and again RBG invited me for a chat, upset that in the book I had taken on her close friend, Justice Scalia, whom I critiqued for, among other things, his claim that he “left his Catholic faith at the door” when he entered the court (as if his moral beliefs and values could be kept hermetically sealed from his interpretation of Constitutional text). In as strong language as I could muster I also went after his invoking Romans 13 to claim, no less, that God authorized civil authority to kill criminals. I gathered that Scalia had been upset by my book, which in turn upset Justice Ginsburg. She advised me to stick to my mission of educating the public and steer away from Constitutional arguments. I thanked her but inside myself I held firm, and still do, to taking on justices and judges, who play a crucial role in legitimizing cruelty and the demeaning of human life; a role that has led, thus far, to the government killing of over 1500 human beings.

In a five/four judgment to allow the execution of my friend Dobie Gillis Williams in 1999, Justice Scalia cast the deciding vote. Dobie was an indigent, innocent African American man with an IQ of 65, convicted and sentenced to death by an all-white jury in Many, a little town in Louisiana. As Dobie’s spiritual advisor I witnessed his agony and accompanied him to his death in 1999. To this day I am outraged that Scalia, steeped in privilege and esteemed as a witty, intelligent, charming lecturer, was entrusted with the raw power to construct his erudite, “originalist” arguments that sanction killing the “Dobies” of this world. The contrived, bogus, so-called “originalist” way of interpreting the meaning of the Constitution, that Scalia made popular with conservative justices, is nothing but a contrivance to mask justices’ real opinions and their values, so they don’t have to confront the “evolving standards of decency” in our society. Such originalists believe that our Constitution was sealed in stone the day it was written – the legal equivalent of a carbonite-frozen Hans Solo. To such jurists, torturing and killing people who have been rendered defenseless is perfectly legally acceptable today because it was acceptable in the days of the Framers.

My third encounter with RBG was in 2017 at the Kennedy Center where the opera of Dead Man Walking was performed. I later found out that RBG herself had pressed for the opera to be performed, and when I presented a pre- performance lecture about my experiences that had led to the creation of the opera, there was RBG in the audience attentive to every word. 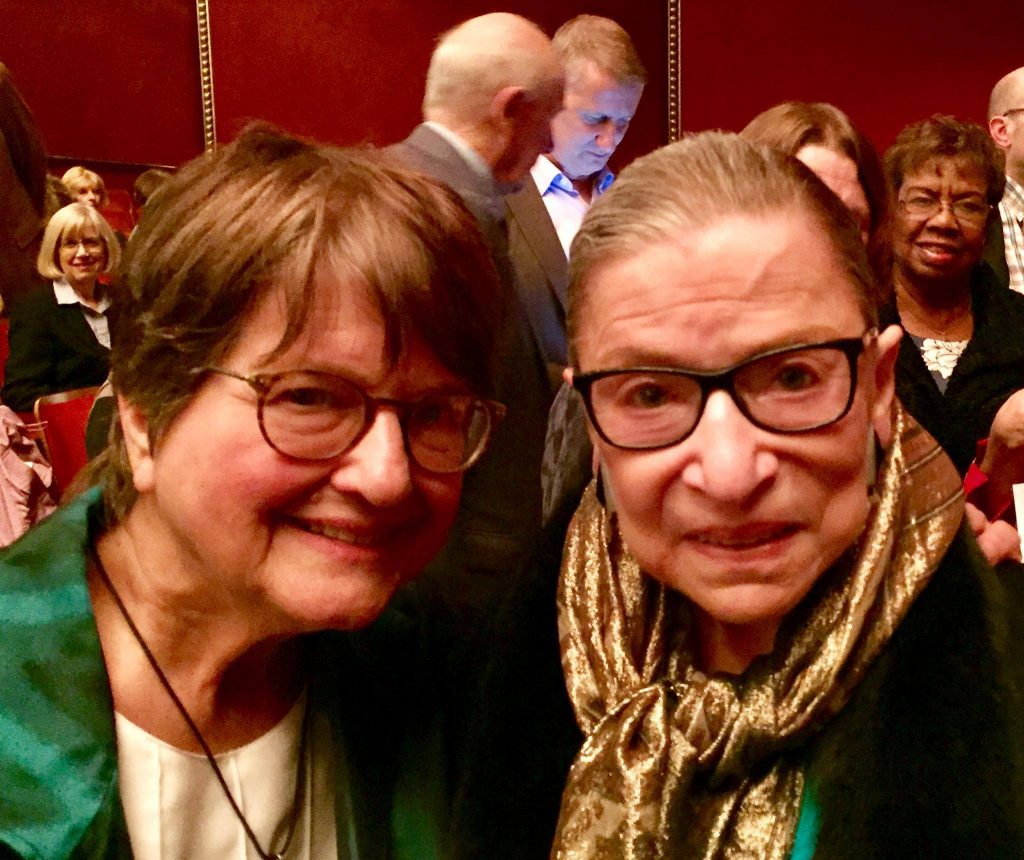