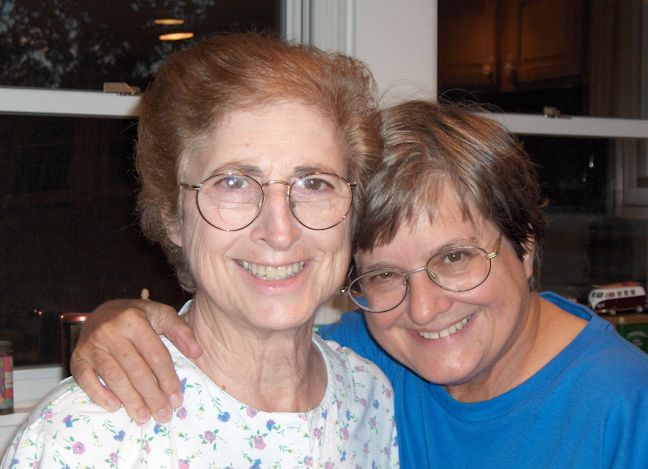 Although I am the public face of our organization, my work would not be possible without the efforts and deep commitment of our small, dedicated team.

We’re a gang of seven - Sister Margaret Maggio, Emile Netzhammer, Carolyn Clulee, Rose Vines and Elizabeth Ryan, who all work with me in New Orleans, plus Rachael Hudak (we New Orleanians call her “Rachael Whodat”), who is based at DePaul University in Chicago. I should also mention Melly Casanova, our energetic intern who currently works alongside Rachael.

I want to start introducing you to this team, starting with Sister Margaret, who’s been at my side since the very early days. Many of you who have organized events with us know Sister Marg well - she’s the voice on the other end of the phone line. She manages my speaking schedule, my flights and an incredible array of other details. She’s my right arm, my go-to sister. I am so lucky to have her in my life.

Sister Margaret’s official title is Administrative Assistant for the Ministry Against the Death Penalty (MADP). In that role, she has worked with thousands of people throughout the world to coordinate my lectures and events. MADP’s Project Manager, Rachael Hudak, recently sat down to talk with Sister Margaret about her 18 years of experience working with me. Here is a quick audio snippet (3 minutes), excerpts from the interview and, at the bottom of this post, the entire audio interview (40 minutes).

Excerpts from the interview with Sister Margaret Maggio

Rachael: What were your first experiences working with Sr. Helen and how did you get started on this work?

Sr. Margaret: …So I always tease her and say the first thing I did was separate the paper clips from the rubber bands in her drawer…and then she said “Maybe, you know, when they’re going to make this movie about my book, Dead Man Walking, maybe you should help. I don’t know what that’s going to entail, but we’ll see.”

The movie came out in 1995… and people started going to see it in big cities like Chicago, Los Angles, New York… And all the theatre people, the managers and everything said, “Well, nobody walked out when the credits came on, they just kinda sat there.” So that was exciting, you know?..

And then, in 1996, it was March of 96’, we had gone to a breakfast meeting, in this little town, St. Francisville. We were picking up our friend’s mother in Baton Rouge on the way back. That was the day they were announcing the Academy Awards… So she comes running to the front door and she says, “We’ve been nominated in four categories. Director, Best Picture, Best Actor and Best Actress. So we were so excited. So she took us out to lunch to celebrate…So anyway, then we went to the Academy Awards, and as you know, it was a Cinderella experience, and Susan Sarandon got best actress, and it was just a wonderful evening. We me a lot of movie stars, and it was just so much fun.

Rachael: Was it like you expected it would be?

Sr. Margaret: … We were just so excited about that experience. So we got to go to parties, before the Academy and after the Academy awards and meet movie stars. It was just a very, very exciting experience. I never dreamed I’d get to do that but hey, here was my opportunity.

Rachael: But didn’t you say you started in 93’?

Sr. Margaret: …Well actually, it didn’t start in 93’, it started in 95’. When the movie was being made in New Orleans…So eighteen years, it will be nineteen in February. So that’s really how it all started. And it got more and more involved as time went on. It was just the two of us…And now, it has mushroomed.

Sr. Margaret: Yes, we got a board. The Sisters of St. Joseph, which was our founding congregation, had a board of just sisters…It just got bigger and bigger…So we have a lot more sisters who are interested in helping us… And then having our archives now at DePaul… So that was an exciting time too, that we joined with DePaul, and we know all our archives there, instead of just sitting in closets and shelves in my office. But we never dreamed all of this would happen…

Rachael:  What are your own experiences with learning about and becoming interested in the Death Penalty?

Sr. Margaret: …My degree was in education, and then I got a Masters in Religious Education, and I thought that’s what I would do…And then I started doing that [visiting prisoners]… and I got a new appreciation of what she was doing. A real understanding of what it meant to do the corporal works of Mercy, like visiting the sick and visiting those in prison. When you think of the throwaways of society, where people don’t want to be involved, that would be prisoners…Then you get a new perspective. Who are these people? And can they be redeemed, can their lives be turned around? Of course. You see them as human beings…

Rachael: What’s something that you would want everyone to know about the death penalty?

Sr. Margaret: That once your educated, you don’t want to see people killed…I mean you’re killing someone who killed someone to say that killing is wrong. I just can’t rectify that… Every life is sacred, and I know these people did horrible things, and I don’t condone what they did, but I don’t want to imitate by condoning killing. So I couldn’t be a spiritual director, because I couldn’t watch someone be killed. But I think telling stories of forgiveness is one way enabling people to see that that’s the way to go, that’s not the road to go down. The journey to go down, because it is a journey, is forgiving. And you know we’ve met people, great people, who to me are heroes. Like Lloyd LeBlanc who forgave Eddie and Pat Sonnier for killing his only son. These two guys from Colorado, their father, one was the father of the guy who killed the son of the other man, and they were trying to make sense out of it, and so they became friends. And they travel around talking about forgiveness. What incredible people these are. And there’s so many stories like that, of forgiveness, and I feel like that is a road I have to go down, and we have to educate. Our job to me, is about educating people about how horrible the death penalty is, about when people can be redeemed, and they can have a different kind of life inside of the prison, once they realize that what they’ve done is wrong and they can go down a different path. And why can’t we help them instead of condemning them? So that’s what I see as our role, is helping people to see the death penalty is wrong, it just perpetuates more violence, and condones violence. What about if we reform prison life? So that the people there can turn their lives around in many ways, get a good education, some prisons are doing that. They allow them to take courses in poetry. Who would ever think prisoners would want to write poetry? Or do art? Or calligraphy? Or whatever. Use their talents, because some of them are very, very talented people. So finding the good in even the worst of people that we think are throwaways.

Rachael: Can you describe what the office environment is like today? Who is there every day?

Sr. Margaret: Well, I’m here Monday through Friday, nine to five… I’ll look at Helen’s calendar and then set up all the interviews that she can do by phone, and tv, and newspaper…It’s quite a juggle, especially if they want it this week, right away. Its finding those times in her schedule that she can do it…So every day is filled with all kinds of activities like that. Just keeping up with everyday things…And then people ask for books to be signed, so I have to be in contact with Emile all the time…And then we have a new person on our staff, Elizabeth Ryan, I work with her. Then I’m trying to do work with the Chaplain, at the Angola prison…

Rachael: What do you think is the most challenging part of your job?

Sr. Margaret: The most challenging is keeping Sr. Helen on the road without her being too overwhelmed by all the requests, and trying to give her break days… it just amazes me how many people still want her to come and give her talk, after twenty years. To me that’s phenomenal. But she is an excellent speaker, and her message is important…

Rachael: What does the staff do for fun, to prevent them from getting too stressed out?

Sr. Margaret: Every other month we have a staff meeting, and we’ll usually go out to lunch or something. At Christmas we have a fun party together. Besides having refreshments we’ll play a game like charades, or something crazy just to make everyone laugh and relax…

Rachael: What would you say is the most rewarding thing about your work?

Sr. Margaret: That I’m trying to make a difference in people’s lives. I get these love notes from prisoners, saying “we love you”, “we appreciate you as a friend,” “I’m so happy you’ve come to visit.” If I can make those people happy, to me it’s worth all the trouble that sometimes we have to go through…That’s a very rewarding thing. The other thing is that I’ve gotten to travel with Helen quite a bit…I’ve met some wonderful people, all across the US and even in Europe that I still keep up with… And these are people I treasure; I’ll never stop trying to be in touch with them. It’s just marvelous… How do you measure something like that? It’s just so wonderful.

Rachael: Do you think you’ll see the end of the death penalty in your lifetime?

Sr. Margaret: I don’t know. I’m hopeful because [of] all the states that have done the initiatives, its wonderful… You have all these small groups of people who are so dedicated…it’s not just us, so it feels like a great blessing…We have all these connections. I call them great connections. It’s like lasting friendships. I guess that’s different from just doing something, you know, talking to people and then it’s over. I don’t feel like it’s ever over…